UJ1 has (apparently) wanted to ride to ...Woods Point

for a long time. Not quite sure why ... but what-the-heck, sounded like a plan.

Anyway he talked me into it as well so we took the train to Wang on Wednesday (it left 1hr50m late BTW ) and rode down to Whitfield first night. I guess any old trainspotters can reel off the names of the old stops on the Whitfield line? I recall being diverted down that way once upon a childhood drive...

We stayed at the Whitfield pub which used to have old railway memora ...memorabil ...nick-nacks from the early days but has been tarted up by Pizzini's in recent times and no trace remains. Still 'twas a pleasant stopover with a nice bar and decent priced good food. Breakfast next morning at the WhittyCafe was great and so we headed off towards Mansfield on full stomachs.

Day two we had a pleasant if unremarkable ride from Whitfield via Harry Powers lookout and the classic Tolmie tavern, and on to Mansfield. Some great views along the climb to Tolmie and from the lookout. UJ1, slightly overloaded as is his habit, produced a thermos for hot tea which was a great little pick me up at Harry Powers Lookout. There's lots of Kelly history here in the hills including the road to Stringybark Creek, which may be a route for a future trip perhaps. It was a relaxing roll downhill and across the Broken River plain to our stop at Traveller's Lodge in Mansfield.

Day three was pretty epic - a simple 37kms to Jamieson for a morning tea stop then all the way on to Woods Point with the final climb and descent of Frenchman's Gap a 'highlight' of the day. The road follows the Goulburn River to Knockwood, Gaffney's Creek to ...Gaffney's Creek, and then Raspberry Creek to Frenchmans Gap. It then drops back into the headwaters of the Goulburn River near Woods Point.

This was a tough day no doubt, with 45 kms of gravel (the seal ends just past Kevington) and the climb to finish off. The steaks at the Commercial Hotel at Woods Point are huge, and needed to be !! An evening in a place like this amongst the 4WD-ers and deer hunters, not to mention the hosts Box and Tanya and the local bar-room philosophers, is great fun. Mind you we hit the sack around 9pm.

Day four was even more epic (if possible) - Woods Point to Marysville via Matlock and .... well there's only one way to go !! A staggering initial climb on dead legs out of Woods Point to the turn at Matlock and then several more dot-on-the-map locations for 63 kms before the seal returns near Cumberland Junction - notwithstanding a 7.5km section in the middle of nowhere, apparently a result of provision for workers camps when the Thomson Dam was built. From Cumberland Junction it's a short 20kms to Marysville, albeit over the main range again. This was a looong day in the saddle, not so hard after the first 25km or so but you start to think the gravel will never end. The road is very rough in patches and I suffered 2 pinch flats for my troubles.

Day five we had a relatively benign 84 kms via the Acheron Way and the Warby Rail Trail back to Lilydale and a train ride home from there. After the previous 2 days we cruised easily up the Acheron climb and rolled comfortably down the gravel to Cement Creek. We copped our first showers at Warby and along the trail but it was only a small inconvenience at the end of a substantially greater trip.

For me, fatter tyres, another few low gears (there was a bit of walking up Frenchman's Gap and out of Woods Point to Matlock) and perhaps less load would have helped but at all other times the CX bike held up pretty well, considering. UJ1 might have some pertinent views on appropriate bike/load for such a trip.

Would I do it again? Probably not, but once to Woods Point by bike is certainly something to be satisfied about. I definitely feel better about it today than say 3pm Saturday after the second puncture stop !!

Thanks for that. Great ride report. Any photos to add to it?

I've done the ride over Matlock three times now, each time carrying camping gear. The first time was combined with a ride over Mt Skene from Licola to Jamieson as well. The high country gets addictive, especially once you have tough enough tyres and low enough gears. For cycle-camping you need about 35-44mm tyres and a 17" low gear, then you can enjoy the big climbs.

Pete wrote:Any photos to add to it?

cyclotaur wrote:UJ1 has (apparently) wanted to ride to ...Woods Point

for a long time.

barefoot has also wanted to ride to Woods Point for a long time too.

That's an amazing part of the world, and I'm totally jealous right now.

Good job, gents. Looking forward to the pics as well.

OK, here's a few pics from the trip.

The Catholic Church at Moyhu, Day 1. 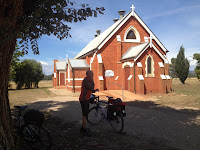 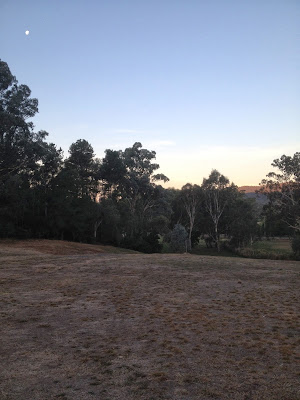 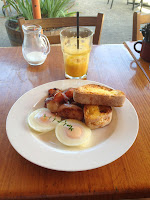 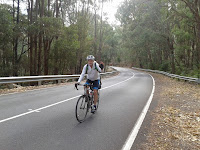 The bar at Tolmie Tavern, Day 2. 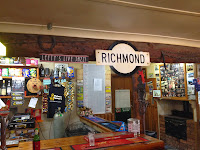 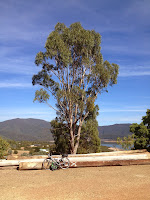 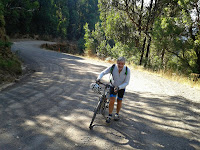 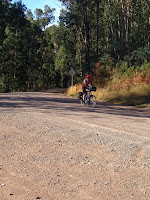 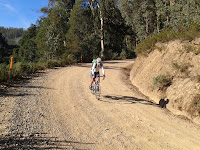 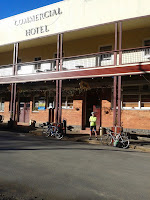 McMillan's Track runs through Woods Point all the way to Omeo. Day 4. 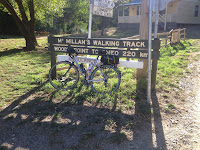 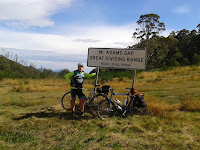 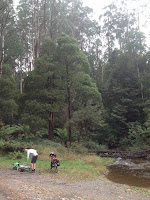 Yes I've always wanted to see this area since I read Ray Peace's epic tale of a solo trip in the 70s from Euroa to Moe via WP and Walhalla. Our ride was a hard one at times but through some beautiful country. The highlight for me was day 3 from Mansfield to Woods Point. I'd never ridden south of Mansfield and the ride to Jamieson was rolling and scenic. Once we left Jamieson we followed the wooded valley until the seal ended and we encountered numerous badly corrugated patches but the gradient was manageable. There were also well maintained camping spots beside the river with just a few campers. Traffic was light on this day which helped the sense of tranquility. This winding section reminded me a little of the delightful road from Swifts Creek to Bruthen following the Tambo. The eagle soaring low over cyclotaur was but one highlight. Frenchman's Gap was a killer late that day and saw us pushing for a km or two. No shame in that as I'm officially "over the hill" age wise.
I took too much stuff on the Surly, deciding at the last minute to ride it because it was tour ready and I packed contingency food supplies (plus a thermos for a roadside cuppa) and odds and sods that you tend to take if you have the space. But I could bomb the descent into WP safely with the 26 x1.5 tyres I used and the XTR V brakes were a great help. It's a trip worth doing whether you camp like Pete has or prefer accommodation and having cooked meals plus a welcome ale or two at the end of a long day. You travel through some fairly remote areas although the 4wds can sometimes move past too fast as one idiot did drifting through a corner spraying gravel and dust. It has plenty of wildlife about but no reptiles to be seen this trip apart from one dead snake and the ride from WP to Marysville once you crest the "hill" out of WP to Matlock is not onerous. You're mostly gradually descending along the ridge on dirt sweeping curve after curve. It is made for an MTB.
Next time or for a planned Mt Wills-Dargo trip, I'll pare back everything and ride my MTB with just a backpack like I did some years back when I was younger and wiser.
Top

I am jealous.
Stay fixed. Keeping a cool head.
Top

Fabulous! I love me a good ride report, especially when I'm doing so little riding myself!

The SqueazaParentals have a place near Jamieson so we know that area very well. We have been riding the Jamieson-Kevington early morning hour ride for years while wondering what we would need in terms of bikes to do the whole trip to Woods Point. I think you answered that for us! Definitely not skinny-tyred road bikes, although our Kona, while heavy, would do a much better job.
Still a cyclist, albeit one who never rides any more....
Top

I rode my CAADX CX bike with 35c tyres. These were generally ok though the rear was a little worn. Fresh 37/38s with a decent tread would have been better. I had two quite severe rear rim flats on the road to Marysville - partly my fault as I hit a rocky patch at high speed. My lowest gear was 34/30 .... could have done with one or two more.

UJ1 rode his Surly LHT, which he felt in retrospect was a bit heavy for the task, and he would choose his MTB next time.
Riding, not racing ... http://reddyneddy.blogspot.com.au/
Top

Looks like I may be running a tour along this route over Easter. Probably start in Lilydale and ride out via Warburton, to Woods Point, Jamiesom, Mansfield, Merton to Euroa. Four days, 300kms. Camping along the way, fully-loaded bike, and plenty of low gears

Ray Peace is a friend of mine. He gleefully told me about the successful tour he did after his return, as I had told him it was unwise at the time of year (early November Cup weekend IIRC) with the forecast of bad weather in a late ski season. He rode through much snow from Matlock to Aberfeldy. 4-5 years later Ray and I with some other friends rode from Traralgon to Licola, Mt Skene, Jamieson, Gaffneys, Woods Point, Matlock and Cumberland Junction, then back to Lilydale. Great summer tour.
Make it safer for everyone - ride bikes on the road
Top

UJ1 and I are currently in Eildon, having ridden Lilydale>Reefton(pub)>WoodsPt>Jamieson>Eildon so far with just the ride back to Warby and Lilydale to come Thursday and Friday.

It's been terrific so far and the road from Jamieson today is a ripper ride, now sealed the whole way of course. The final descent to the GVHwy near Eildon is fantastic.

I'm riding the same light touring rig as last year, while UJ1 has opted for the Cannondale Lefty MTB. It's definitely an easier ride south to north along the WoodsPt-Jamieson road.

Pics to come when we return home.
Riding, not racing ... http://reddyneddy.blogspot.com.au/
Top

I'm totally coming with you next time, okay?

tim
who most likely isn't coming next time either, but wishes he was.
Top

Would do another ride around Eildon-Jamieson Rd again sometime...maybe in the other direction - lots of other good roads to explore in this area, as well as say the Strathbogies.

Returned Eildon to Warby today down the best ride around, the Acheron Way.

Talking of Eildon, anyone with bike expereince north up Skyline Rd & Maintongoon Rd?
It looks wiggly on the map, which can be either a very good or very bad thing...
Just a bike & a place to ride.
Top

Friend of mine is planning to do a one day ride: Melb (Thornbury) to Lilydale, Warburton, Cumberland Junction, Stockmans Reward, Big River Road to Enoch Point and Jamieson. I've told her she's crazy, but she has two or three others keen to do it

(The road from Stockmans Reward to Enoch Point is verging on 4WD track).
Make it safer for everyone - ride bikes on the road
Top
Post Reply
42 posts

Users browsing this forum: No registered users and 1 guest