Thanks again. Highlights in varying degrees are,
1-Attention my 20 yo rigid, rim braked bike got. It was a surprise the amount of people appreciated an oldy.
2-getting through the first loop. This was no place for someone as inexperienced as I am, especially on my bike.
3-I gotta say it, the very short bitumen sections
4-finishing.
Lowlights or points that need attention,
1- my bike. I will be on something different next year. I'm thinking of a 27.5+ hardtail and then I think I should just suck it up and go fs. I struggle to think squishing all over the place is fun but we'll see.
2-at the 85km point I thought I was in for a chance of an overall 7 hours or under but descending the red carpet put this out the window. I could make back a lot of time on the long climb in the third loop but like most of the ride I had to pull over a lot to let the dual suspension and experienced people pass.

Weather was perfect and I really enjoyed riding something different. My budget is limited but I really need a bike for this one. I want to cut at least one hour off my time next year.
Also I will train for it and now I have the bug I'll keep on riding trails even on my current bike til something else comes along. The event was the fourth time I've ever ridden trails and it showed. Some of the descending for me put terror in my bones but I'm really happy to have finished.
Top

faster wrote:1- my bike. I will be on something different next year. I'm thinking of a 27.5+ hardtail and then I think I should just suck it up and go fs. I struggle to think squishing all over the place is fun but we'll see.

There's nothing wrong with a hardtail... I intend to ride HT and rigid until my body says no more.

If you're the DIY type, there are some lovely longer travel hardtail frames out there for not a lot of coin...I reckon these are the best value if on a limited budget and still give you a chance to let it rip when the trails point down

Of course DIYing is never really all that cheap...
Reaching new levels of softness!
Top

Thanks. This is excellent for me to see what is available. I'm hoping to build it up myself too.
After a few hours of the Odyssey 100 I was not really enjoying trying to keep up the pace riding some/most of the tracks because of the thumping through the front wheel. I reckon a hardtail is the way to go because I love being able to climb etc.
I'm interested in the bigger tires though.
Top

faster wrote:I reckon a hardtail is the way to go because I love being able to climb etc.

The days of duallies "not climbing well" is long past. In fact, they potentially climb better than a hardtail for loose, techy climbs. You can stay seated and let the suspension work, while you'd be standing and muscling the bike around on a hardtail.

Thanks again. I'm going to assume hardtails are generally cheaper so this will influence my decision too.
There's a climb in Forrest called the sledgehammer and the only person I saw that rode it was on a fat bike.
At least 30 of us watched him as we were walking our bikes up.
Interesting
Top

MattyP wrote:Jamis make some nice 27.5 hardtails too, like this one. But then I'm biased....

A thousand apologies. I know that I should have mentioned this too.

(Although it's more of a bikepacking rig)

faster wrote:There's a climb in Forrest called the sledgehammer and the only person I saw that rode it was on a fat bike.
At least 30 of us watched him as we were walking our bikes up.
Interesting

You were walking because it was too loose?

The fatty probably has a few advantages in this type of stuff - big tyres at low pressure means HUGE amounts of traction. Fatties also tend to come with stupendously low gearing (22-36 is my lowest). Also, until recently the geometry on most fatties was more adventure/all terrain rather than trail mountain bike. So a mountain bike with 5"+ of travel (which tends to be where things are at these days) will suffer from the whole vague front end thing while climbing super steep stuff compared to something with sharper handling.

Since we're talking hardtails... here's my On One 456 Ti and my wifey's Giant XTC on the ferry to Raymond Island 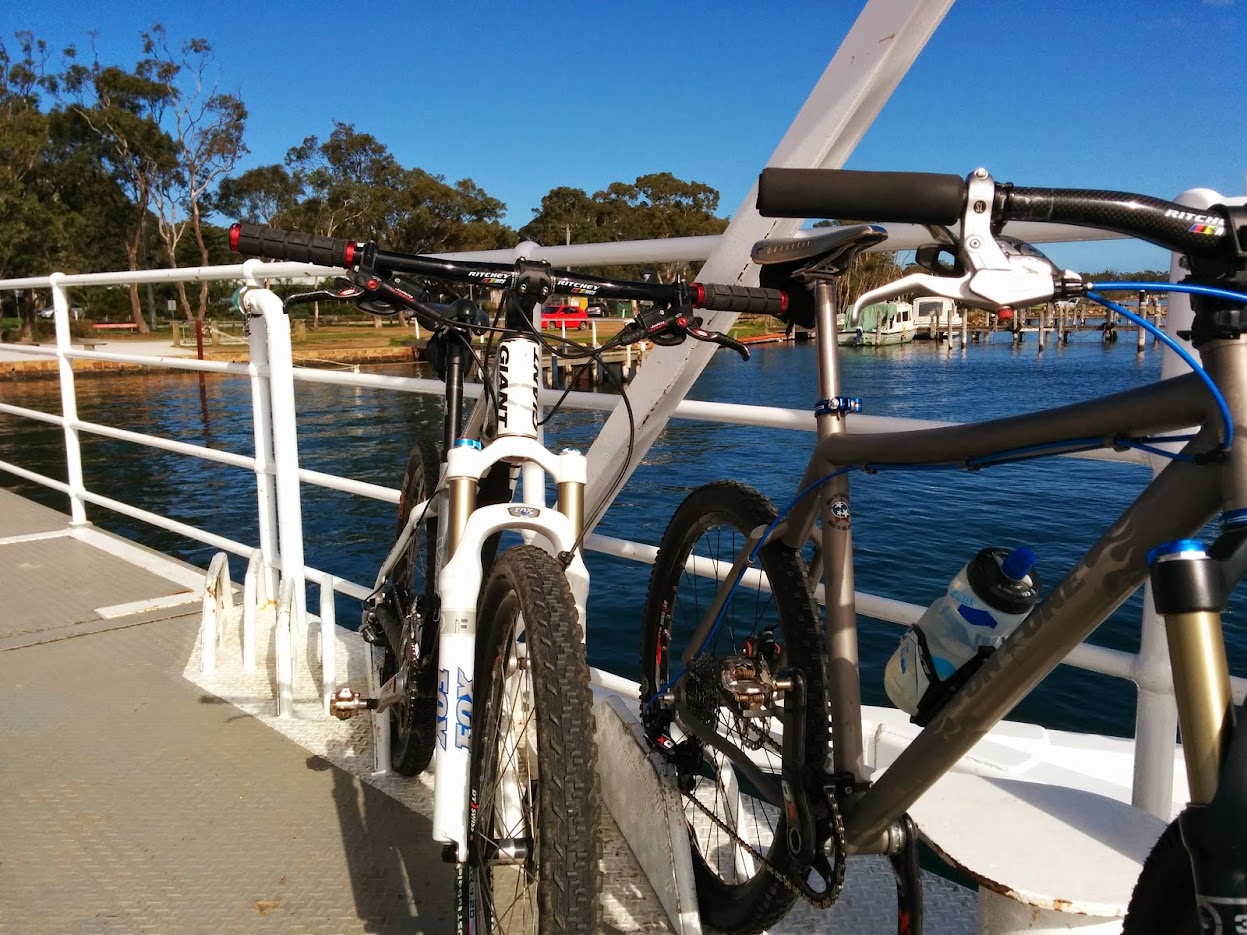 Which climb is Sledgehammer?
Is it the sandy pinch on Caspers asscent climb, or is it only done on the 100?
Dyslexics Have More Nuf.
Top

Stealth
The climb seems to be it's own climb as opposed to a section of some other climb. It's in the first loop of the Odyssey 100.
I've only been there once and that was Saturday.
Sorry for the vague answer
Top

OK, Found it
It's only done on the 100, and I haven't been over that side
And the climb I was thinking it was, is not done on the 100
Dyslexics Have More Nuf.
Top

(I'm a bit of a fan of dirt drops)
Reaching new levels of softness!
Top

They look good. I'm looking out for a steel 27.5 + mtb hardtail. Will stick with flat bars.
Do I have to use 11 speed with hydraulic discs ?
Top

faster wrote:Do I have to use 11 speed with hydraulic discs ?

Unlike road bikes, mountain bike shifter pods and brake levers are still separate units (unless you're some weirdo using Shimano Dual Control). There are various adaptors that allow you to mount your brake lever and shifter pods using a single clamp, but they operate just fine as individual units. In fact, it's not a sin to mix and match brakes and drivetrain from different brands, although you might sometimes run into some clearance issues (eg brake hydro reservoir gets in the way of the shift lever) if you mix brands.

Best value hydro of the last few years has been the Shimano XT. Stacks of power and really good price. They even convinced a mechanical-disc-brake-loving luddite like me to upgrade some of my bikes. Matching Shimano Ice tech rotors are on the expensive side, but the brakes work just fine without them.
Reaching new levels of softness!
Top
Post Reply
75 posts

Return to “Plan a ride”

Users browsing this forum: No registered users and 7 guests