The Ballaarat to Melbourne Classic 2014

Canuck wrote:Speaking of Gellies- who was I talking to on the red one...

Next time, I'm going to make it compulsory for everyone to have their bike with them when they sign in. I briefly met lots of people while handing out the kits... but once you were all on your bikes, I had a completely different frame of reference and had no idea who anyone was again

I had a fantastic day - I got to ride as far as Werribee, thanks to my mate Dave's offer to drive the big purple sag wagon that far. Loved it. Tried to help tow a few of the tail-gunners into Werribee... wow, that road really changes complexion when tailwind turns headwind.

I've just tallied the ledgers, and calculated that the Ballaarat to Melbourne Classic has raised $7511 for the Pallister-Killian Syndrome Foundation of Australia.

(And having announced that, I've had a few more people ask how to donate - so I've pointed them toward http://www.mycause.com.au/events/ballaa ... rneclassic , and let them prove my accounting wrong).

Canuck wrote:Speaking of Gellies- who was I talking to on the red one with the shiny shiny King hubs? We discussed running; never properly introduced.

I think it's changed a bit since then. Now sporting silver Velocity rimes and light purple Chris King hubs. Rode with him most of the way from the start to Ballan when he decided to back off a bit. Smart move, I was pretty shattered by the end. The road to Werribee was pretty demoralising with the head wind and realising we weren't that much over half way.

Thanks to Tim, family and friends for organising a great event and hope the money does make a difference.

And how good were the burgers? I know some were a little slow getting there but I'll be back for sure, and I hardly ever go into town...

That ride got me to 840km's for the year. Nothing like some dedication to your training hey?
Neil
The older I get, the better I was...
Top

Yes it has changed since that pic. I'd spent a bit putting it together so used what I had in the shed. As you can see I'd broken a few of the "rules" but it's now safely within the confines of the Velominati's dictates.

Nice to ride with you blybo and also chat with you Canuck.

PS the hubs are pewter in colour. I tried as close as possible to match the gunmetal finish of the Deda post, bars and stem.
Top

Thanks all for a great ride.

Sooo disappointed the ride profile from Bacchus Marsh to Werribee didn’t pan out as I hoped with that little head-on breeze. I got a slight mechanical in Werribee ( rear brake failed) & previous rides between Werribee & the CBD convinced me to bail for home cooked pizza & cheesecake.
I liked the Mt Warrenheip diversion.

I hope I don’t sound wingie about the route, pouring over maps of anything after Bacchus Marsh, it does look like a struggle to link up “good biking roads” into Melbourne.

Marx wrote:struggle to link up “good biking roads” into Melbourne.

Coming back into town, I've bailed at Bacchus Marsh several times because I haven't felt like dealing with traffic after spending a fantastic weekend riding in isolation further out and up. My usual route involves unsealed Boundary and Mt Cottrell Rds which is fun on the fat tyres but then you have 4 or 5 kms on Greigs and Exford Rd which is probably only-border line cyclable unless you are heading through at school pick-up/drop-off when it becomes, something less. Once you get out past there, the world's your oyster.
http://hughiescycling.blogspot.com.au/
Top

Marx wrote:I hope I don’t sound wingie about the route, pouring over maps of anything after Bacchus Marsh, it does look like a struggle to link up “good biking roads” into Melbourne.

The Werribee route is the best I've been able to find. There's just a chasm of bleurgh between Bacchus and Caroline Springs.

Funny how the run into Werribee was the highlight of last year's ride, and the lowlight of this year's. Weather is a fickle thing

I wonder what weather next year will throw at us

I encouraged the group I was riding with from Bacchus to skip the detour off the highway (up past the speedway), and just crank it along the main road to Geelong to make up time. Not a good choice. That road isn't horrible for traffic - there's always a shoulder - but the flow of traffic is just relentless. Then to back up from 9km of that and onto the long straight grind to Werribee... not a highlight at all. The extra distance of the detour would have been well worth it to get a break in the traffic.

So, with the detour off that highway, and with favourable winds to help the run in to Werribee... I reckon the Bay Trail has to be one of the nicest ways to approach Melbourne. Especially from the western half of the state. Great way to stay far away from the roads.

Pretty much all of what everyone else said.

Wow, a great day. From bus & trailer before to beer and buns after; great company, great riding. 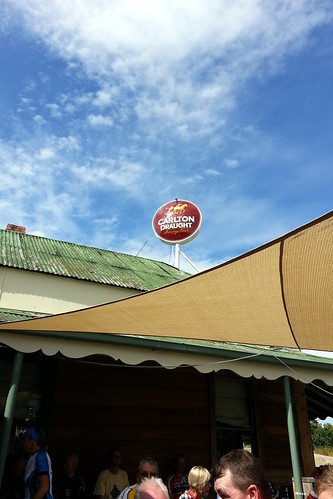 Must have done something bad in a previous life to incur the puncture fairy wrath, not one, but *four* punctures.

And a two... 200m down the road the spare goes FWOP! and dead flat, tyre off to discover it had previously been patched and that patch is now hanging off like an old bandaid. Peel off the old patch, clean it all up, patch it with a sticky get-you-home patch and pump up and off I went ...

And a three... Just pulled in to Sanctuary lakes and it goes bounce bounce bounce, splodge. Hmm, I now have two tubes, both with 'oles in 'em and some near useless stick-on patches that seem to last 10km each. I suspect that the van with Tim and spare tubes may not have any 26" tubes. Dave and John to the rescue, Dave insists I take his only spare and we're back on the road again. No problems the rest of the way up around the bay, into the CBD and down to Fed. square -- or as my autocorrecting phone has it, Fed Squirrel -- except perhaps a slight glooming of the light.

Number four? That was this afternoon, I hadn't looked at the bike since I rode home from Caulfield station after catching a post beer and burger train. Seems that there must be something stuck in the front as well, that one's now resting on the rim!

Haven't had a puncture in that bike since October last year, then four in two days!

schwarz wrote:What are your plans for 2015, Barefoot?

I would need to have done a good bit of planning by now if there was going to be a Balla(a)rat to Melbourne in the traditional late-summer time slot.

I haven't done so.

The 2014 ride was as big as a ride can reasonably go without getting a whole lot more official. A ride with more than 30 people is supposed to have VicRoads approval. That implies risk assessments, management plans, blah blah administrivia blah. I cringe at the prospect of telling VicRoads that I'm sending 50+ riders down a section of the Western Freeway. No doubt they'd want us to arrange (and pay for) a Police escort, official warning signs, and... ugh.

Ballarat to Melbourne worked as a fun event, and definitely worked as a fundraiser, so I don't think it's finished. It's just resting. I'm having ideas as to what the next one might be.

Goodness, and 30 is not many considering the groups that ride on beach rd.... and especially when it's riding at own pace!

Could an option be to make it two separate "rides" according to pace? Or would there be too much risk of your being caught out with it being the same fundraiser, same meeting spots along the way etc.?
Top

Well I enjoyed it plenty. Am thinking of maybe just doing it this year myself, trying to beat my PBs of 2014... eg, fewer than three punctures, arrive with more than 10 minutes of daylight left, find more than 16G of SD card along the way.

Any plans to run this again in the near future Barefoot? Would love to do the ride again.
Top
Post Reply
147 posts

Return to “Plan a ride”

Users browsing this forum: No registered users and 21 guests